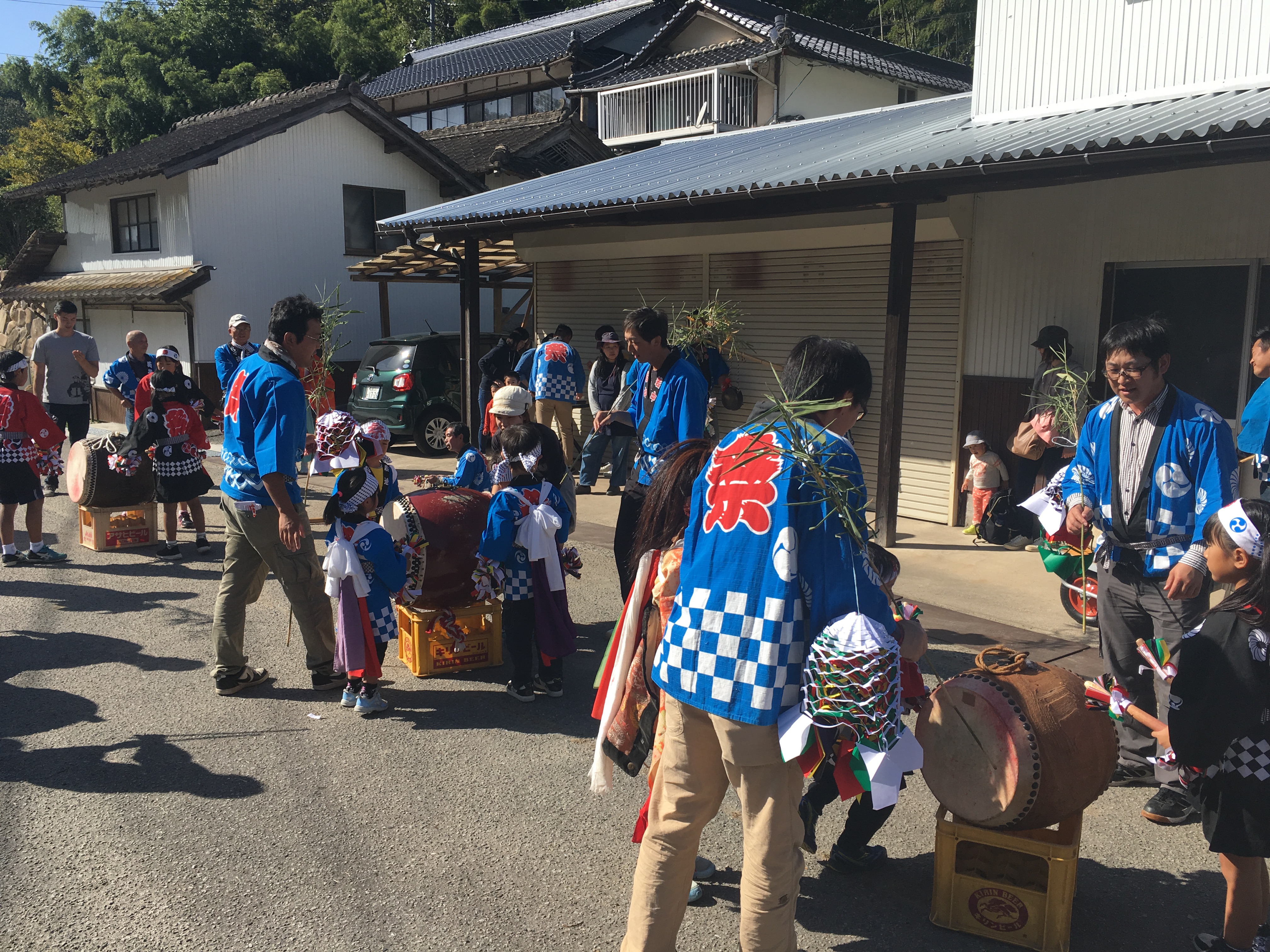 A few weeks ago was the local 秋祭り”akimatsuri”, fall festival, here in Fukuda. It was a long and exhausting, yet beautiful and exhilarating experience.

It is common all over the world to have some sort of celebration to mark the autumn season. Japan is no different. The country side in particular, still lives and breaths farm life and so the pattern of the year centers around the growing and harvesting seasons. There are all sorts of different ways that Japan marks autumn, there are national celebrations, regional celebrations, and community celebrations. Our local community’s celebration is visiting the local shrine, Fukudahachiman. 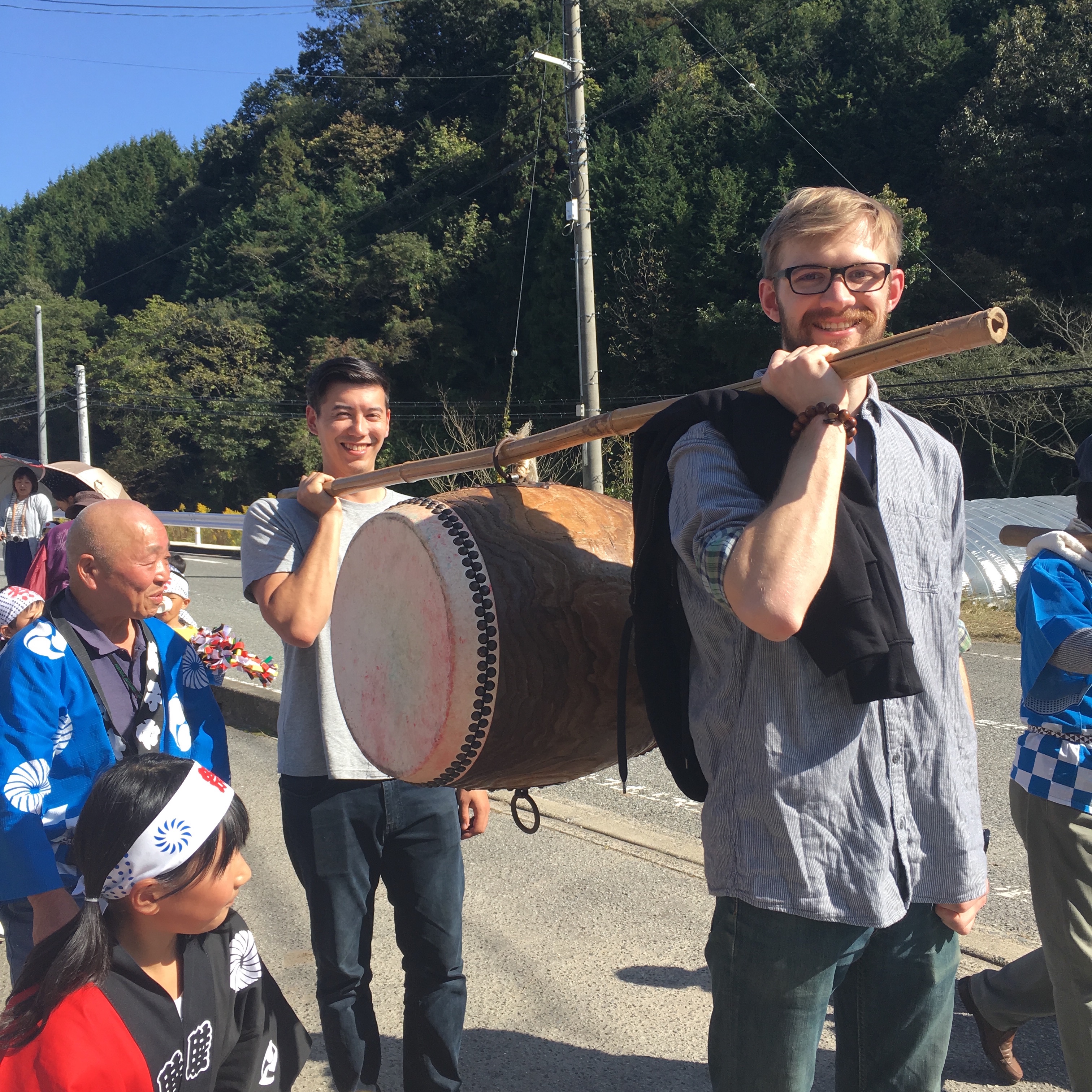 A note about shrines and Japanese religion before I go on, for those who don’t know. If you have been to Japan or seen a movie that takes place in Japan, you may have noticed the large amount of shrines and temples. Shrines are Shinto and temples are Buddhist. Shintoism is the indigenous religion of Japan, like indigenous religions across the world, it is pagan (meaning a belief in multiple gods) and very connected with nature. Shrines come in all shapes and sizes. Some are large and impressive, they are said to house powerful and important gods, some are as small as a shoe box, they are said to house little spirits. Shrines are often found tucked away in nature, even the large and popular ones are sometimes difficult to find if you don’t know the way. Buddhist temples are typically larger and showier than Shinto shrines. Buddhism was founded in India by Siddhartha in the sixth century B.C.E, and made it to Japan about a thousand years later via China. Buddhism was very popular among Japanese leaders who were heavily influenced by China at the time. It slowly took hold in Japan and became the primary religion here.

Despite a long history with Shintoism and Buddhism, and the numerous shrines and temples scattered across the country, Japan is not a religious country by Western standards. Unlike other countries, where indigenous religions have been pushed into small circles and forgotten by the wider population, Shintoism has not lost its centrality to Japanese culture and identity. Shintoism has also managed to connect and mesh in with Buddhism, which is also central to Japanese culture and identity. There are individuals in Japan who are very religious, and there are those who have taken to other religions such as Christianity and Islam, but overall, Japan does not operate under a typical religious doctrine. When I have asked Japanese about their religious identity, they may consider themselves to be spiritual, but they celebrate holidays with religious roots and visit shrines and temples for tradition, not religious reasons. 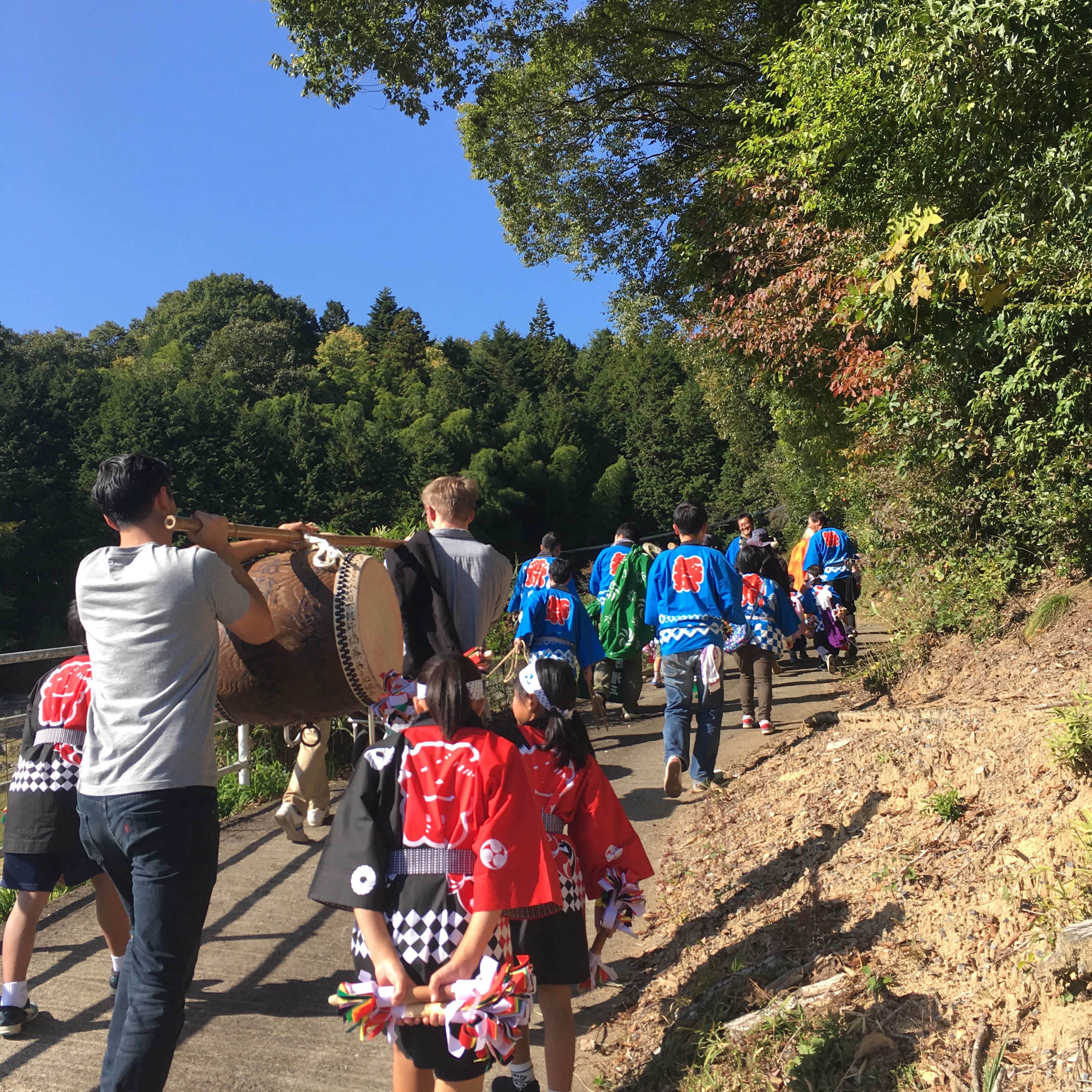 That is a short, overly simplified way of describing religion in Japan, but I think its important to understand as you read the following description of my experience at the shrine, Fukudahachiman.

The local god lives at Fukudahachiman. He protects our community, and once a year, around the time the harvest is happening, the community members have a big celebration and take him out to see the harvest and all the new developments that have happened in the past year.

Our part of the neighborhood gathered at the local meeting place which is a small building down the road from our house. We had a spread of food, sushi, koroke (fried, breaded mashed potato), and beer (despite the fact that it was 11am). When we were done eating, we got the kids dressed up and brought out the instruments. The kids and some adults wore Happi (a light over-shirt that is brightly colored and tied with a sash) and white headbands. The instruments were large drums that were strapped to long bamboo pools so they could be carried around, and some bells. Once it was all set up, everyone assumed their roles. The kids gathered in circles around the drums and did a little dance around them, rhythmically hitting the drum to the sound of the bell that was being rung by an adult. Other adults sang a song (I can’t tell you what it was about, it was in very old Japanese). 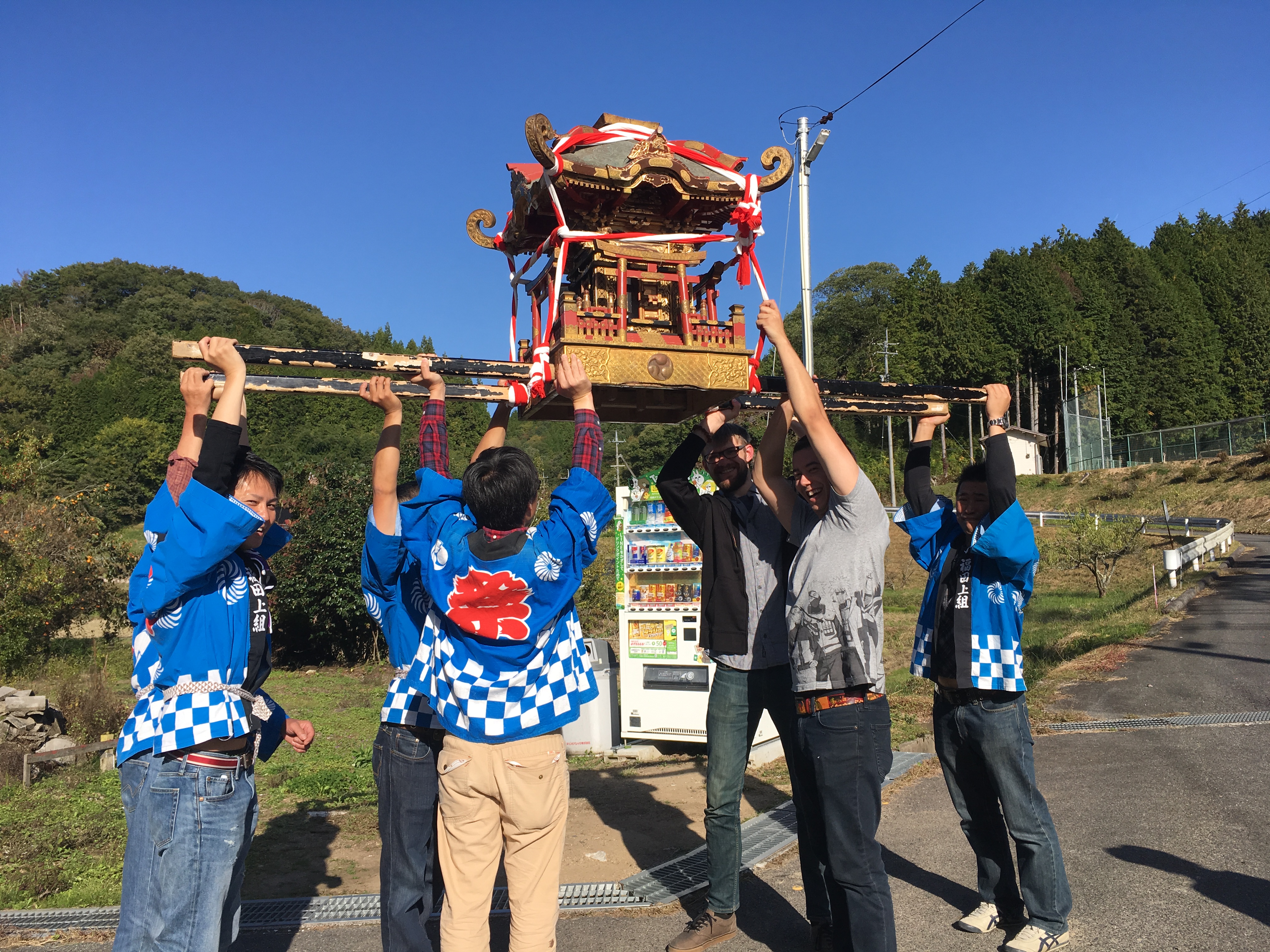 After this first little dance we went down the road, singing and ringing the bells as we went until we ran into the other half of the neighborhood. They had the same outfits and instruments apart from two interesting characters. One was a older man dressed in a traditional, orange colored robe. He was wearing a red, long nosed, scary faced, mask with a white wig. There was also a guy dressed as a dragon. He had to hold up this large wooden head and move the jaw around as he danced. He went around and gently bit the top of everyone’s head throughout the day for good luck and to keep bad illnesses away. The young kids were terrified of him. They would run crying and screaming when the dragon came up to them. As our half of the neighborhood joined this one, everyone danced and sang together.

We proceeded down the road towards Fukudahachiman as one big group. We stopped at five different houses and did the dance in front of all of them. After dancing, everyone took a little rest and the people in the house would serve snacks, juice and sake to everyone. Various community members joined in on our parade as we went along.

When we finally got to Fukudahachiman, there was a particularly long and more complicated dance in front of the shrine, then a rest afterwards where we were served mochi (rice cake) and more sake. By this point I had had about six shots of sake (not including the beer I had with lunch). I was a little buzzed. But, not as buzzed as some of the elderly gentlemen with us. They showed up for the whole event red faced and smiling, I suspect they had pregamed all morning. 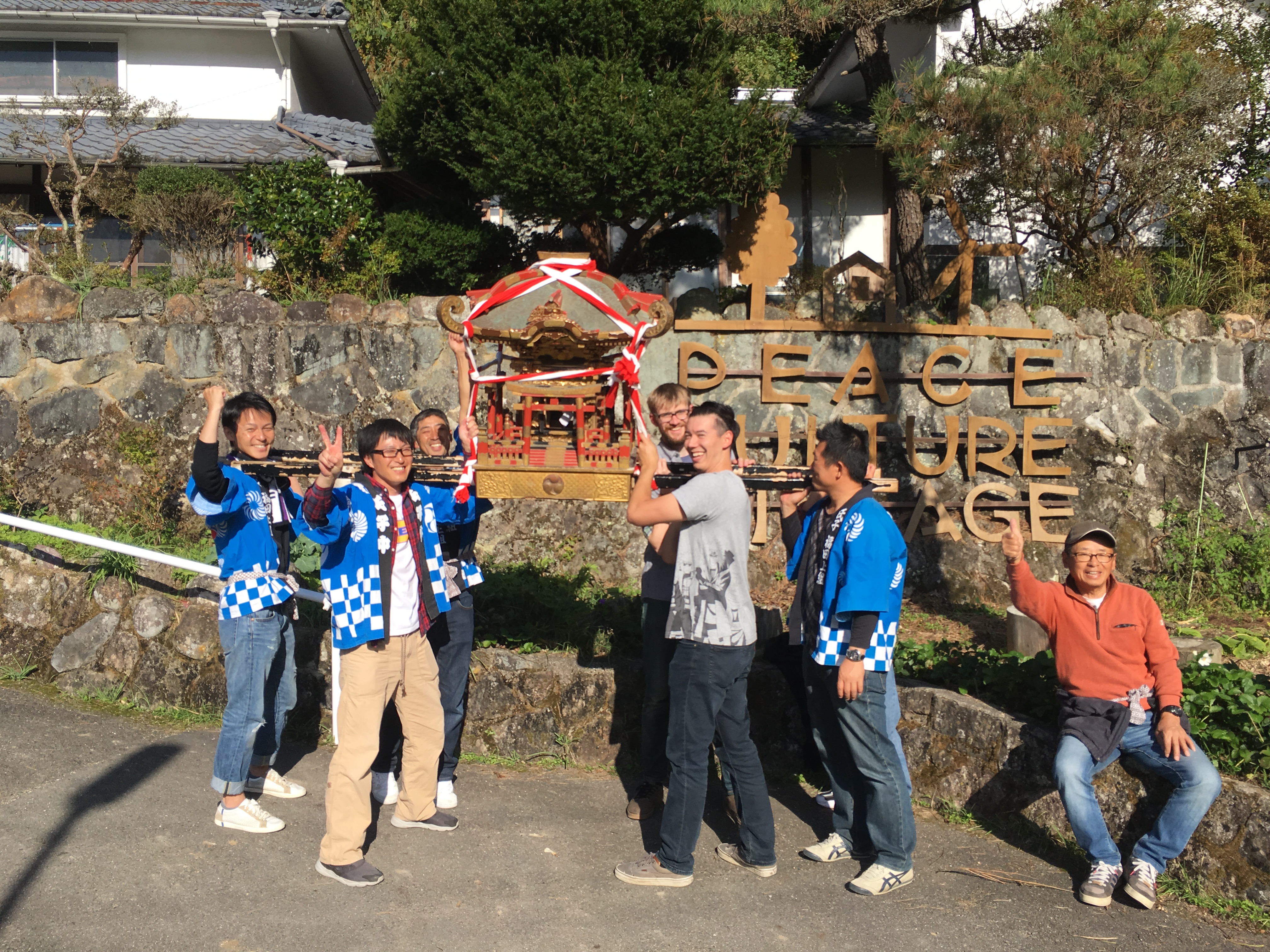 The next event was waking the god up and taking him on a little tour around the neighborhood. The god sleeps in a small house that is about 3 ft tall with a A-frame roof. The house sits inside the shrine and it was taken out for the event. The Kannushi (the name of someone who runs a Shinto shrine), pokes his head into the little house to wake the god up. Donations are also accepted for this event, the names of everyone who donated are read allowed in front of the god. Then, the strong, young men of the community pick up the house, which is perched on two long bamboo polls, and move the house up and down and a wave like motion.

Everyone waits at the shrine as the god is taken around the neighborhood. We got a new vending machine this year, our god got a look at that. The guys carrying the little house did the same wave like motion in front of that. What was really special, was that the god was taken to PCV! So, our house and organization has been recognized by the local god (which also means it has been recognized by the community). I feel very honored by this.

After the god saw all the new things in the area, he was taken to the top of a scenic hill where everyone from the shrine came to meet us. Everyone did one last performance while the god got to gaze out over the rice paddies and the community’s bountiful harvest. After this he was carried back up to the shrine and put back to bed. 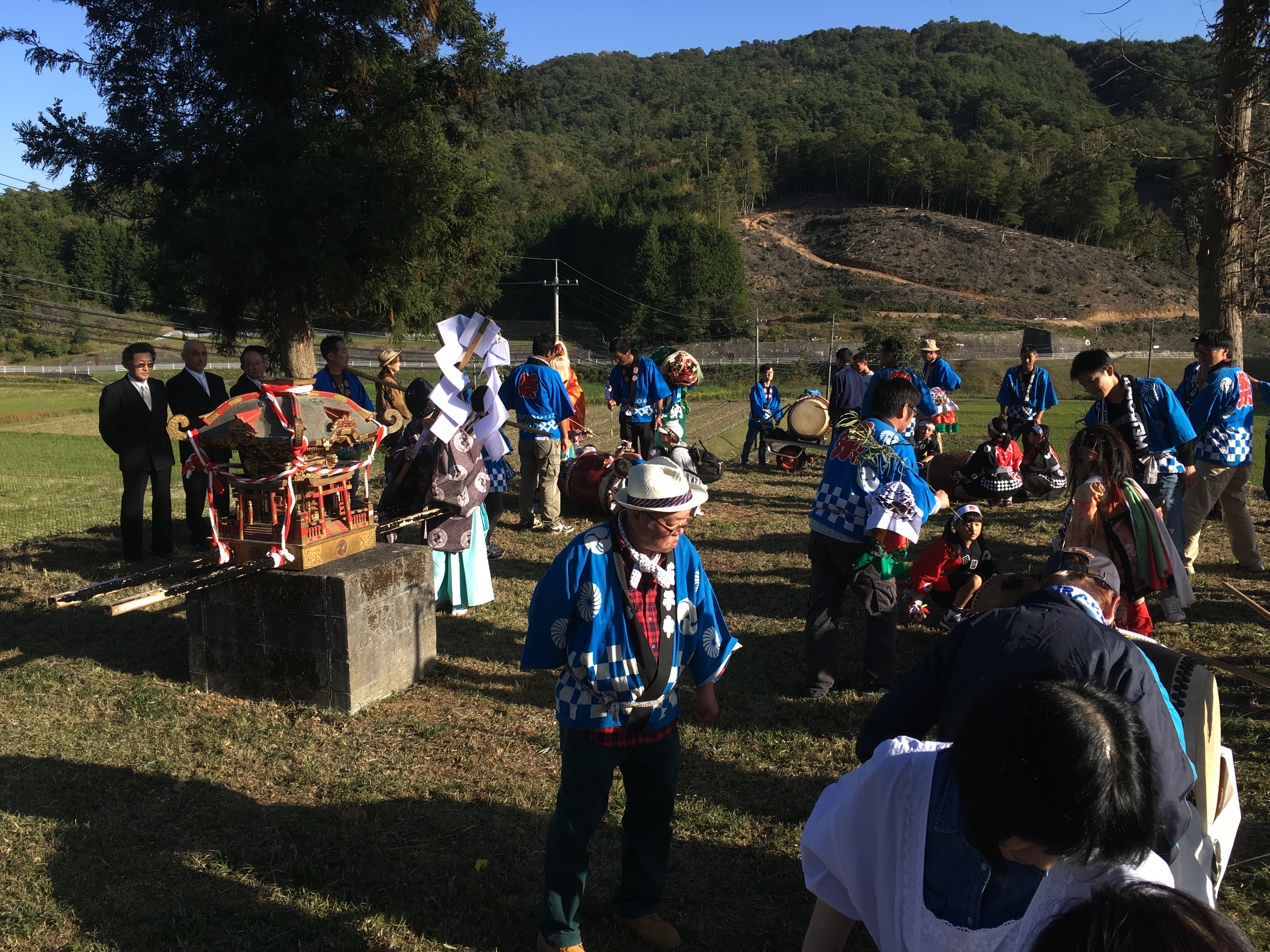 After the event was over, everyone from our part of the neighborhood headed back to our little building where more eating and drinking ensued. I didn’t make it home until close to 8pm.

I am extremely honored and happy to have been a part of this event. It was so much fun and I had a great time getting to know the local traditions and everyone who lives here. I had some great conversations (despite my terrible Japanese) and I learned that the local people do pay attention to and care that we are here. This makes me feel good, and it makes PCV stronger.

Please check your e-mail for a link to activate your account.