A Meeting with Hibakusha (among other happenings)

Earlier this week, PCV staff (along with Basil Schur, our latest guest from Australia) took a trip down to Hiroshima City. There, along with our Hiroshima-based staff, we got to meet with Mr. Tsuboi Sunao, a Hibakusha who, at the age of 20, survived the atomic bombing of Hiroshima City.

Representing Hidankyo, the leading association of A-bomb survivors, Mr. Tsuboi formally thanked the PCV staff for spearheading their petition campaign. This petition calls for, on behalf of the remaining Hibakusha, the Japanese government to sign the United Nations’ “Treaty on the Prohibition of Nuclear Weapons”, and so bring us one step closer to a non-nuclear world. In the coming months, we will work closely with Ms. Rebecca Irby (PEAC’s executive director) to try and gather as many global signatures as possible. 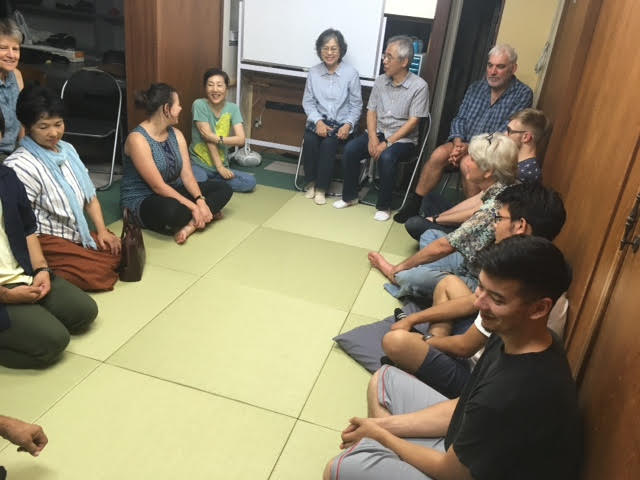 While in Hiroshima, our new Konu staff got to meet prayer hall attendees who, on the 6th of each month, hold a evening “prayer for peace”. After 20 minutes of silent prayer, it was a great opportunity to introduce the new staff to those attendees (as they are generous supporters and community members).

Although we’re back in Konu now, it’s been raining a fair bit, which has the effect of stymying outdoor work and activities. At the very least, everyone has an excuse to get their computer work done. Certainly, I’m sure that the blueberry bushes will appreciate the downpour.

Please check your e-mail for a link to activate your account.